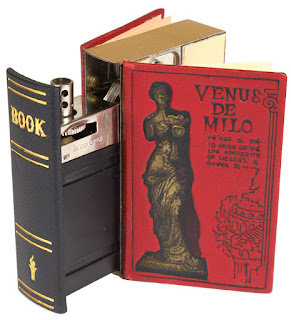 From January 27 through March 12, 2016 at the Grolier Club in New York City, I curated the first exhibition of my collection of blooks, which included over 200 book-shaped objects representing over 250 years of their development from many countries. As a part-time resident of Tivoli, New York, I am aware of the important and active role that Bard College has in its community and am pleased to participate in its artistic and scholarly dialogue by presenting a segment of the original Grolier Club exhibition at the Stevenson Library.  I hope that some of you will get the chance to visit the exhibition before it closes next month. Below is a list of objects on view. Most are illustrated in my book.

If you can't make it to the exhibition, you can still order my book on this website.

Posted by Mindell Dubansky at 2:27 PM