Before the availability of refrigeration which made maple syrup a viable commodity, maple products were produced in solid forms such as maple sugar. Maple sugar was often processed in decorative wooden molds as sale or gift items. Sugar molds were made during the 19th century throughout New England and Canada. I have found a curious group of bible molds which produced small sugar bibles that would fit in your hand. I have seen these in three different designs and assembly styles. Two are in my collection and one is at the Royal Ontario Museum. I don't really have an understanding yet of the context of the maple sugar bibles, but they could have been served at religious communal meals and holidays, or perhaps they were gifts or rewards for children. 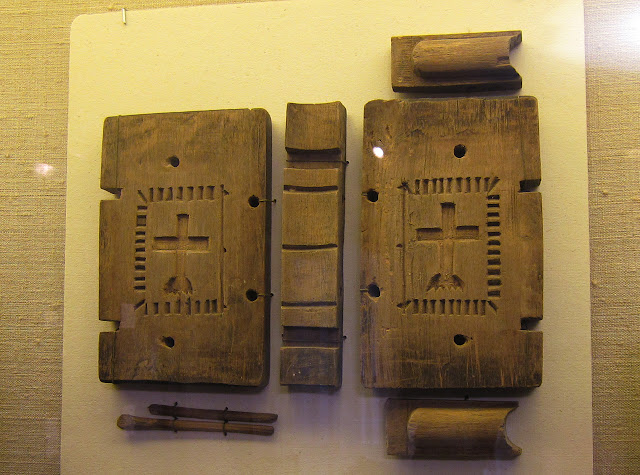 Mold 1: This mold was purchased from a dealer in Maine. It probably dates from the late 19th century. It is missing it's foredge piece. In the shipping box there was an additional spine piece, indicating that there were at least two book molds. This is a six-piece mold held together with four wood pegs. Only two are shown. Its bookish features include a curved spine with three raised bands, squares, and a cross design typical of a bookbinding. The mold is fully described in my book Blooks: The Art of Books That Aren't. To understand more about the history and production of maple sugar, I refer you to the essay Maple History, from the website of the Massachusetts Maple Producers Association. Here is a segment:
From the journals of early New England explorers we have learned that there were three types of maple sugar made by the Northeastern American Indians: "Grain Sugar" a coarse granulated sugar similar to that we know as "brown sugar"; "Cake Sugar," sugar poured into wooden molds to become hard cakes or blocks; and "Wax Sugar," which was made by boiling syrup extra thick and pouring it over snow. This wax sugar is what we know today as "sugar on snow."
In the early days maple sap was boiled down and made into maple sugar, instead of the more common maple syrup that we see today. There was no easy way to store syrup as a liquid, but hardened, dry maple sugar was easily stored for use later in the year. The Native Americans of New England used their maple sugar as gifts, for trading, to mix with grains and berries and bear fat. During the heat of summer a special treat was a drink made of maple sugar dissolved in water. The early European settlers who came to New England made maple sugar in the way which they learned from the Native Indian population. The settlers set up sugar camps in the woods where the maple trees were most plentiful, and the trees were slashed with an ax to allow the sap to drip out and be collected. As early as 1790 it was suggested that. slashing the trees was not good for their health, and that a better way was to drill a half inch hole in the tree and insert a "spill" or spile to allow the sap to run out. The early spiles were made of a softwood twig such as sumac that had a soft center. The center was pushed out leaving a hollow wooden tube that could be inserted into a hole drilled into the maple tree. The sap would then drip out through the hollow tube or "spile", and into a collection vessel such as a hollowed out log.
These early sugarmakers gathered their sap in wooden buckets as they went from tree to tree. The sap was then boiled down in a series of large iron kettles hanging over a long open fire. As the syrup got thicker in one kettle it was ladled into the next one and fresh sap was then added to the first kettle. In this way, they always had the last kettle full of nearly completed syrup or sugar. When it was finally thickened enough, the liquid sugar was stirred until it began to crystallize, then poured of into wooden molds. These blocks of maple sugar could be broken up or shaved later in the year when needed.﻿﻿﻿﻿﻿﻿﻿﻿﻿﻿﻿﻿﻿﻿﻿﻿﻿ (continued below)
Mold 2: Below is another mold from my collection. Instead of pegs, it uses two wood clamps to lock the pieces for pouring. Notice that the top piece, which represents the foredge of the bible is upside down in this photograph. This mold revealed something new to me about bible molds and their usage.


Posted by Mindell Dubansky at 3:05 PM