﻿
This past Sunday, I had the pleasure of visiting Bruce and Lynn Heckman to see their remarkable collection of over 1,000 unique, folk art book objects. This is certainly the largest collection of its kind, certainly larger than mine which is only a little over 500. I was expecting to see a substantial collection of unique objects, but I was amazed by the breath and beauty of the collection, the extended show-and-tell viewing and the enthusiastic reception that Lynn and Bruce gave me. I’m not sure I have yet digested what I have seen, but I don’t think I will ever forget the wonderful, inspiring day I had with them. I think I'll make another post later to show a few of the blooks I took photos of that particularly interested me.

Lynn and Bruce collect as a team and the joy they share in collecting is reflected in the picture of them holding a large book box. They collect many types of book objects, but the largest single category, from a media perspective, is that of  carved wooden boxes with various functions, made during the 18th through 20th centuries. Sewing boxes, puzzle boxes, snake boxes, love-gift boxes, solid carved books, Civil War lancet boxes, banks and safes were all represented; however, the most prominent group within the wooden boxes were the charming American and Canadian spruce gum boxes. Bruce and Lynn provided this post for us so that we can learn more about the history of the spruce gum book box: 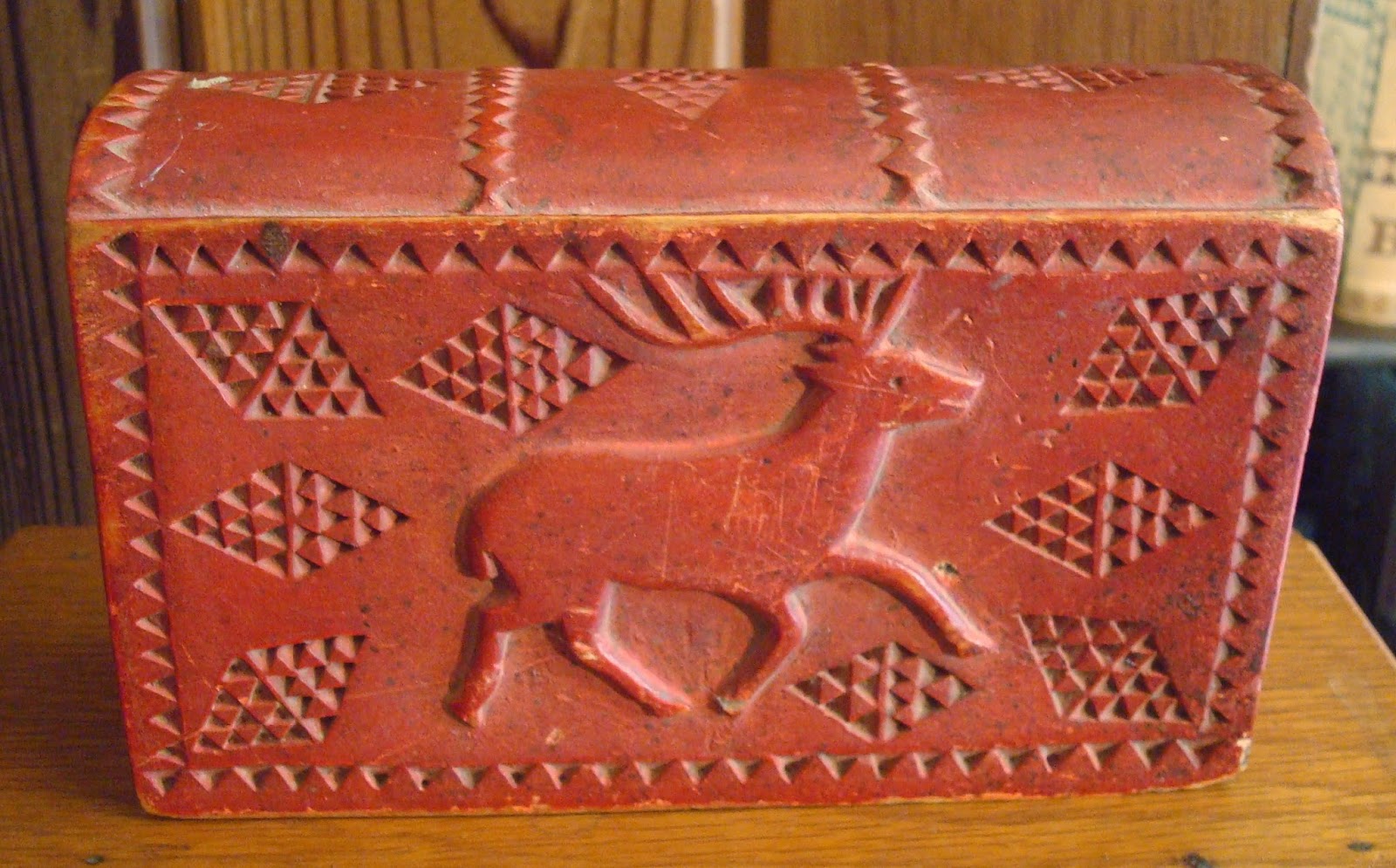 Spruce gum boxes are manifestations of the same impulses that drive the creation of much Folk Art:  Love, moral fervor, whimsy, loneliness due to isolation, and an excessive availability of time. The chewing of gum has been going on for 5000 years, since Neolithic times.  Spruce gum was excreted by trees in the North Woods of Canada and the U.S. and harvested by lumbermen to put in boxes to bring home to loved ones for their chewing  enjoyment. Carving of the boxes spans the 1870's to the 1920's, though some modern examples exist. Modern boxes have a lack of patina that cries out to you after you've handled enough boxes.  We think that some boxes with patriotic were produced for the American Centennial of 1876. 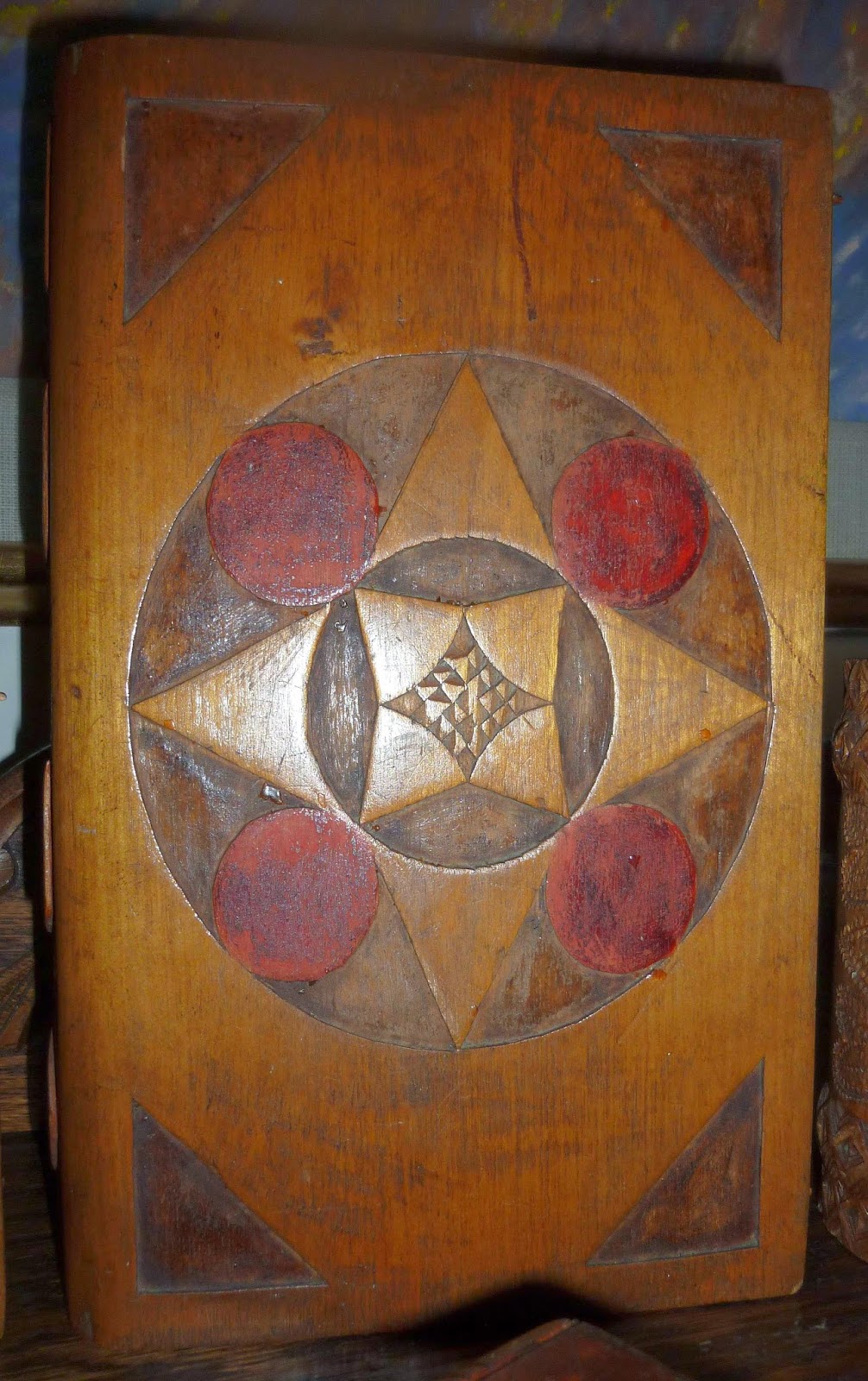 Books were the models for almost all spruce gum boxes, though many were made in the form of a barrel. Bookishness is not normally associated with the lumbermen of the North Woods, but the book icon was widely adapted.  The book-shaped boxes appeal from the tactile, visual, and historical points of view.  Most fit nicely in the hand and were about five inches tall, although some are as small as two and one-half inches and as tall as thirteen inches. Carving varies from the simple to the very intricate. Paint and stains are used, as well as photographs, applied hearts, mirrors, found objects, and colored beeswax. Some boxes have the names of people and places, dates, and sentimental expressions. 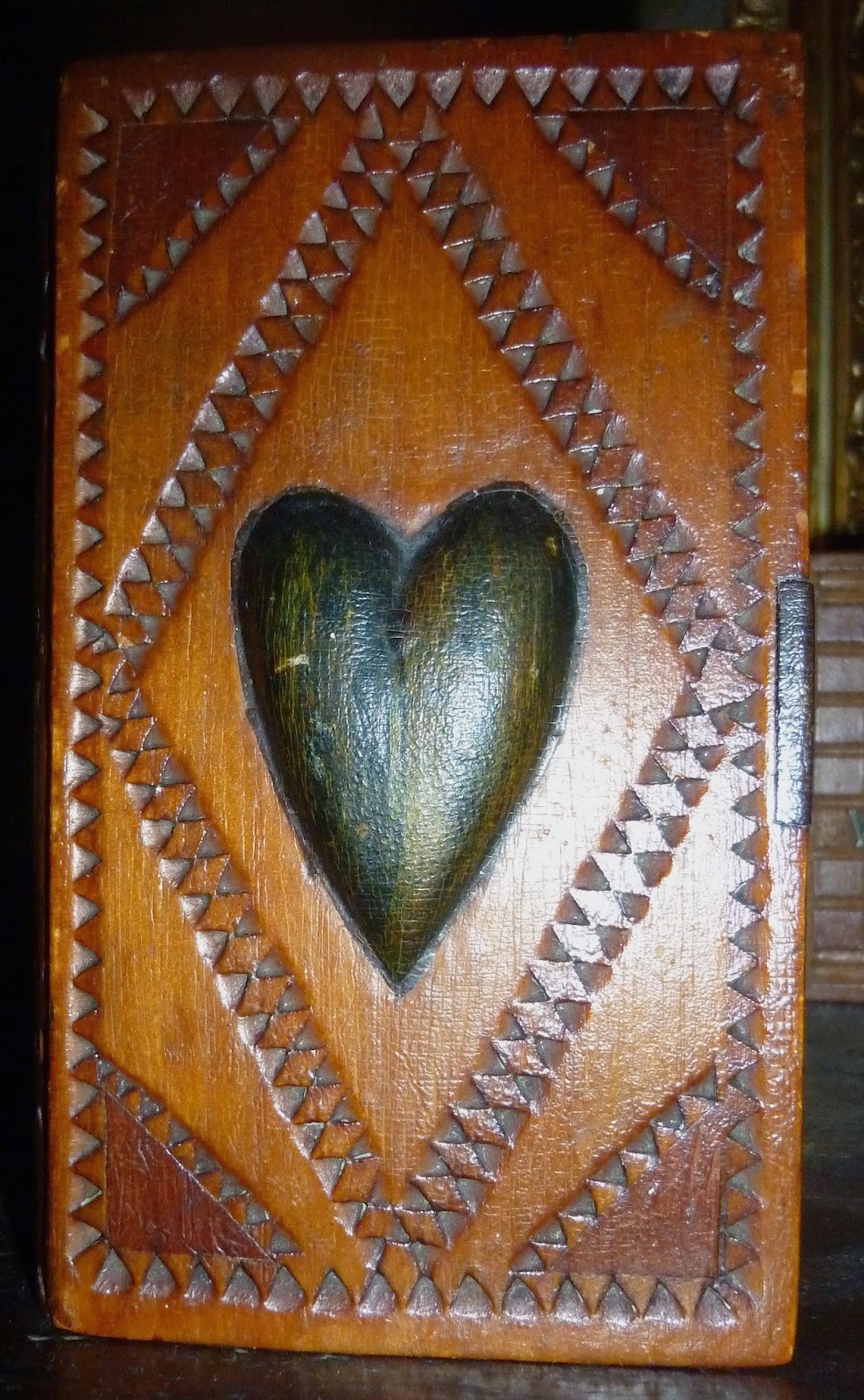 Time was abundant in the North Woods and, after a day of felling trees, the nights were occupied with box carving.  The design was made, the piece of wood hollowed out from both ends, and slides were made for the top and bottom.  The decoration was carved and applied and the boxes sealed with shellac.  The heart was the most common decoration and signifies that these objects were created for loved ones at home.  Extensive chip carving was used.  Anchors, ropes, stars, crosses, tree of life, and geometric shapes were incised or applied.

If readers would like to see and learn more about spruce boxes, the Maine State Museum has very good images and descriptions of the boxes on their online website.

Click here to read an article about spruce gum from Northern Woodlands Magazine.

Posted by Mindell Dubansky at 7:38 AM